As the move to Timeline for Facebook pages became official in recent days (no longer “optional,” that is) brands have ramped up their efforts to make use of new functions and layouts. By the March 30 deadline for changeover, less than 8 million of the approximately 39 million pages on Facebook had upgraded to Timeline voluntarily.

Ready or not — it’s time for Timeline! By now, most admins will have added a new cover photo, so what else can hotel brands in particular look forward to? 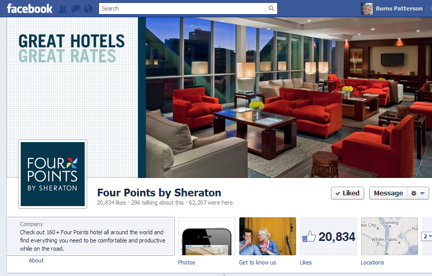 The good news is, as reported by Wildfire Interactive, for the vast majority of Facebook pages that did switch to Timeline during the 30-day “trial” period in March, various measures of engagement all trended upward. Comments per post increased 40%, “likes” of posts increased 60% and “People Talking About” metrics increased 67%. The new, more visually compelling format appears to be more engaging for fans. Interestingly, overall page likes remained flat — suggesting that fans must still be won over longer term with value and consistently relevant content.

So, beyond the cover photo, what’s new and interesting in Timeline? Given all the attention going to upstart Pinterest, it’s unlikely a coincidence that Facebook has rolled out the ability to “pin” favorite posts. (Doesn’t anybody trademark terms anymore?) It’s a useful feature that allows admins to select a specific post and keep it “pinned” to the top of the page timeline for up to seven days. Use this feature to drive traffic to specific tabs or to highlight special events, for instance.

Admins can also “highlight” a post, which will double its real estate on the page and telegraph its importance to fans. Speaking of those fans — there are several changes. Admins now have the option of direct-messaging fans, a long sought-after feature. Posts by fans themselves are segmented in to a “recent posts by others” section, which has earned poor reviews from some people who miss being able to post directly to the main area of a brand’s wall. It will be more important than ever to offer a forum for fans to interact with the brand and with each other.

Other changes? Much has been made of the elimination of the “welcome page” option for pages, but for me, that’s a welcome change. Meantime, tabs (or apps) have taken center stage, with the top four residing just below the cover photo. You can have more than four, but they won’t be visible to fans unless they click to expand that section. Remember, though, that you can swap the position of your tabs and highlight specific tabs for a specific period of time. “Brand milestones” deserves a blog post of its own sometime, so I’ll save that for another day.

Timeline’s time has come, and the sky hasn’t fallen in for brand pages. Maybe, in fact, the sky’s the limit! So have at it, and let me know if there are Timeline pages or techniques out there you admire.