AIBTM was held last week in Baltimore. There were more than 700 exhibitors prepared to sell their properties, services and destinations to numerous global meeting and incentive companies. I had the chance to visit with former colleagues that I had not seen in 20 years. While the show was massive, my biggest takeaway came from one individual.

Many of you in the industry are familiar with Frank McVeigh, a legend in the meetings management field. We sat down for our one-on-one appointment and spoke for 20 minutes. After the first five minutes, and after exchanging business cards for the initial introduction, he said, “Bart, I don’t know your name.” The point he was making was that my name badge had twisted around, and he simply saw the back of the tag.

He proceeded to flip his badge around, and showed me that it was printed on both sides. Guess what I had done immediately? 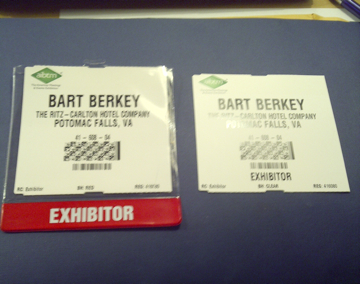 Idea #1: Always print name badges on both sides, especially if you don’t have an adjustable lanyard that may twist.

We continued with our conversation. “Bart, do you know how hotel companies can save a fortune by not having to replace furniture as often?” Frank asked. I was imagining an answer dealing with quality of product. He stated, “Put two luggage racks in the room.” This, he said, would eliminate scuffed and torn furniture that often gets damaged as a result of placing suitcases on the furniture.

Idea #2: Purchase two luggage racks for each hotel guestroom to save money on furniture repairs.

I was intrigued by his ideas and asked him if the had any other suggestions for improving guests’ hotel stays. He told me a story of how he showered and shaved in the morning before a business presentation. He put what he thought was lotion onto his face and proceeded to the meeting in which he spoke on stage. After a few moments, his face got warm and uncomfortable. Finally, he realized that he had put conditioner on his face instead of lotion.

Idea #3: Indicate in LARGE PRINT the containers for shampoo, body gel and conditioner, as some people that require reading glasses will not be taking their glasses into the shower each morning.

Thank you, Frank, for your ideas and refreshing outlook on life and on business! My wife still wants to know if we all can come to Ireland with you and your relatives.