Perhaps among your New Year’s Resolutions this year is a plan to make your Facebook page more engaging. It’s a worthy goal! It’s time, after all, to move beyond simply counting up “likes” on your page as a measure of success, and instead evaluate how many of your fans you’re really engaging. 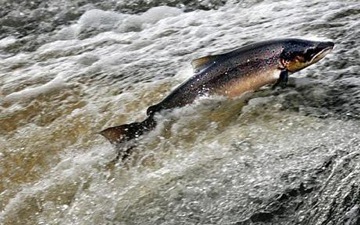 That is, it’s time to see more of your posts rise to the top of your fans’ newsfeeds, rather than get washed “downstream” where they may never been seen at all.

I’m using this fishy metaphor to make the point that the Facebook newsfeed is not identical to the Twitter stream. Posts don’t simply appear in chronological order for your fans, as Tweets in a Twitter stream do.

When you post to the wall of your Facebook page, you might be surprised to learn that many of your fans (those who have liked your page) may never actually see your post. That’s because Facebook uses an internal algorithm, known as Edgerank, to determine which posts rise to the top of a particular user’s newsfeed. Certainly the time and date of your post is a part of the equation (“recency”), but the social platform is also automatically adding other elements to the equation. What type of post was it? The algorithm “weights” certain type of posts higher than others, so posts that are sharing content — such as a photo, video or link — are weighted higher than pure text posts.

Next, engagement leads — exponentially — to more engagement. That is, if fans start interacting with your post — liking, commenting on or even sharing the post — it will receive extra weight and remain longer near the top of fans’ newsfeeds.

Your relationship with your fans is also cumulative. The more often they have interacted with you on previous posts (and vice versa), the more likely your posts are to appear towards the top of their newsfeeds the next time around. Facebook seeks to judge which people or pages individuals value most — or at least, which they interact with most — and then make those people and pages more prominent and easily accessible in the newsfeed.

This feature had led some commentators to suggest that if you have a major initiative that you’re planning to roll out on Facebook, you should be sure to seed a healthy batch of compelling posts in the weeks leading up to the campaign, to score highly on “recent engagement” with your fans.

I’d prefer not to over think it and just suggest that you continue to try to create posts that are of value to your fans and that are relevant to your hotel or your brand. As you think ahead to an “editorial calendar” of the type of content you’ll be posting, resolve as well to stock up on media that can bring the content to life, such as photos, cost-effective short videos (these need not be “professionally” produced) and links to additional information. It’s an “algorithm” for success.