It’s practically impossible for me to pick my favorite restaurant, but if pressed I definitely would not choose any of the high-end, trendy places I’ve dined, much as I enjoyed many of them. Instead, I would highlight Colletti’s, a family-owned Italian restaurant on Chicago’s Northwest Side, where I grew up. Colletti’s isn’t known for its gourmet fare or design-forward ambience, but I have yet to hear of anyone trying the restaurant’s thin-crust pizza without falling in love. At its core, Colletti’s celebrates Italian comfort food, and for me personally, the restaurant represents the added element of nostalgia for all the times I visited there as a kid.

I’ve been thinking lately about hotels’ challenge to balance delivering what’s on trend with the simpler, more traditional dishes guests crave. One example is Balcony Restaurant at the DoubleTree by Hilton Philadelphia Center City, which when it debuted last year touted its “comfort food family-friendly menu.” Signature entrées include homemade meatloaf, turkey dinner and chicken pot pie. “Families going on vacation often miss the comforts of home while they are traveling, and we felt that providing them with a touch of genuine ‘home cooking’ would make them feel connected,” Executive Chef Neal Drinkwine said in Balcony’s opening news release.

Along similar lines, I was struck by a couple Asian examples from late last year that also provided a historical twist. The Astor Hotel, Tianjin in China late last fall offered menus from its archives, such as that prepared for Huang Xing, the first commander in chief for the Republic of China (traditional prawn cocktail; fricassee of rabbit with wild mushrooms and sautéed spatiza; and Scottish cranachan of raspberries, oats, whiskey, honey and cream). 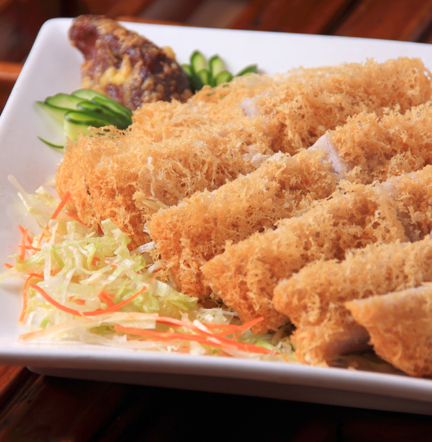 These examples make me think there are many more creative ways for hotels to play up the power of comfort foods and highlight them on menus with a fresh twist or two. I’d love to hear about examples you may have — or, at the very least, tell me about your own “Colletti’s” in the comments!