The Spanish really had it right when they came up with a couple of civilization’s really great ideas: tapas and afternoon naps. Though the nap thing may be a bit tough to accomplish for most these days, the idea of sharing a meal of tasty small portions was a pretty good idea that has stood the test of time.

Small-plate menus have been coming on strong for at least 10 years, so this is no fad. Far past Spanish roots, small plates can be anything from appetizers to desserts. The 1990s multi-course tasting menus have been replaced. Guests choosing to dine over a wide range of flavors and styles through small-plate formats allows everyone more say in their menu choices, relying less on the chef’s whim and more on their own preferences. Dining has become a way of adventure and travel, allowing world flavors to be experienced from the confines of many home cities, and in many ways the only point of reference to a far off land is through a local restaurant specializing in small samplings of that destination. From an operator perspective, average checks are normally slightly higher, as the cumulative average spend increases when the per plate prices are seductively lower.

I believe small-plate formats are so successful because there is less risk of not liking an item if you are only emotionally and financially invested in a small portion. A defining part of the popularity of small plate menus and concepts is that there is a much lower level of commitment involved with a small portion than a large one. Not all diners are foodies, and in fact, even the food-fascinated are hesitant to place their dinner bets on a full plate of something never tried. But if it is just one of many other items, the impact of not liking the dish is dramatically reduced. Without small plates, I would venture to say many of the trends we see now would never have taken off, simply because of the initial fear of committing to regular sized portions.

I was in Los Angeles recently, an increasingly great food town. With a group of foodies and non-foodies, we ended up at a Peruvian restaurant called Picca, off of Pico Boulevard in West L.A.

Meaning “to nibble,” Picca was packed with all the right people, drinking Pisco Sours and eating amazing ceviche, causa (fish topped with potato puree and built almost like sushi) and anticuchos. The antichuchos were amazing, especially the “corazon” — skewered beef heart with a very interesting walnut pesto. 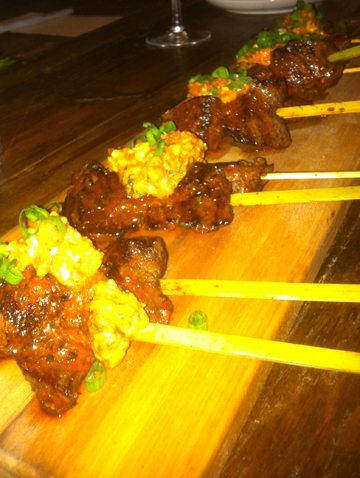 Could this amazing experience and restaurant be created without small plates? Not as far as I am concerned — this can only be achieved in a menu environment where the commitment to a single item is balanced by a broader selection of menu safety in numbers. For chefs, we should take notice that the best way to find support of the most unique and creative plates is to go small.

I like small plates, but I am getting tired of all the little bites, especially in catering. What do you think?