Myanmar: The next hotbed for tourism growth and hotel development?

Myanmar: The next hotbed for tourism growth and hotel development?

I was fortunate to visit Myanmar, the former Burma, twice last year. I say fortunate for a few reasons.

First, it was probably one of the most spectacular destinations I have ever visited, from the openness and friendliness of the people to the beauty of the scenery in Bagan and Inle Lake to the richness of the culture and heritage with temples and pagodas at every corner.

Second, with everything that has been published about the political situation in Myanmar (and I will not comment about politics in this article), I was pleasantly surprised by how accessible and easy to travel the largest country in Southeast Asia really is. Yes, my blackberry didn’t work, and getting Internet access can be sporadic, but that might even be a blessing sometimes when on vacation.

Third, I say fortunate because we all assume Myanmar will develop tourism. While infrastructure and capacity-building is necessary for tourism development, the question is, will these developments change the authenticity of this unique destination? Will development be responsible and sustainable? Will public and private sectors collaborate in order to set policies that drive tourism in a controlled fashion and promote small innovative enterprises as well as discourage corruption? Yangon might be one of the best colonial cityscapes anywhere in the world, and what stands out most is what is not there: no McDonalds or Starbucks, no David Beckhams staring from every billboard, no Samsung advertising hoardings, no iPhones, no Hyundais or VW SUVs patrolling the streets, no Taiwanese pop singers warbling out of speakers, no Singapore property developers building skyscrapers. Yet. What has been unwittingly but perfectly preserved during five decades of economic stagnation might not survive the construction boom that’s under way.

I was also fortunate that I was able to contribute at the first ever international tourism conference in Myanmar last December, the Travel Leaders Symposium on Sustainable Tourism Development in Bagan, hosted by the Ministry of Hotels and Tourism of Myanmar, organized by the Mekong Tourism Coordinating Office, and supported by the Pacific Asia Travel Association. Moderating the closing leaders panel, we were witness to passion to do the right thing by the private sector as well as support by the public sector to focus on empowerment and training; responsible tourism development; protection of heritage, culture, heritage and people; and developing infrastructure. On one side, arrival numbers are growing, but on the other side, there are not enough facilities to meet demand. Myanmar has a shortage of hotel rooms and domestic airline seats during this year’s high season, and this issue can potentially have a huge negative impact on tourism. The ministry and private sectors must consider developing a master plan to solve these problems. Deputy Minister for Tourism U Htay Aung said the government believed that “quick tourism growth” could lead to “a dilution” of Myanmar’s cultural heritage.

Myanmar could become the next hotbed for hotel development. Hotel operators such as Starwood, Marriott, Carlson, Accor and others are targeting Myanmar. “Marriott would love to be there if conditions are right,” said Arne Sorenson, president and incoming CEO of Marriott International, at the 2012 World Economic Forum in Davos. Chains currently in Myanmar are largely Asian-based, such as Shangri-La Hotels & Resorts. Figures provided by the Ministry of Hotels and Tourism show arrival numbers jumped more than 26% in the first 11 months of 2011, following a record-breaking 2010. More than 343,000 tourists visited Myanmar between January 1 and November 30 last year, up from 271,547 during the same period in 2010. A source from the Union of Myanmar Travel Association confirmed that the country was enjoying “solid increases” in tourist numbers, with all major hotels in Yangon and other key destinations being consistently booked out. An arrivals increase of at least 20% to 25% is targeted for the 2011/2012 fiscal year, which ends in March.

While growth in 2011 was driven by inbound travelers from Asia — Thailand being the largest source market — a shift in clientele is expected next year, with more bookings from the United States, Australia and the United Kingdom, which in the past mostly adhered to tourism boycott policies. With only 24,692 rooms in the country, accommodations are stretched thin. Right now there are just 1,700 upper-scale hotel rooms in Yangon. None have been added since 1998, and the pipeline remains small. A target to build 24,000 guestrooms in the budget, 2- and 3-star categories over the next few years has been set. There are 25 foreign investment-backed hotels here, and we may see a deluge if some policy changes take effect. The Ministry of Hotels and Tourism now charges US$200,000 or a percentage of gross revenue as a fee, whichever is higher, but is working on a formula that will be attractive to new overseas investors.

It all sounded encouraging and uplifting. Long ruled by an authoritarian military dictatorship that was suspicious of outsiders, Myanmar potentially has a huge amount to offer travelers seeking an exotic destination unblemished by the rapid development elsewhere in Southeast Asia. But will Myanmar be able to control tourism growth in a way that Bhutan has been able to do by setting strict tourism arrivals and daily tariffs for tourists? Or find its own recipe for success that will make sure tourism revenues go back to the local community? What if foreign investors with big checkbooks knock on the door to build big hotels in cultural protected areas? What if tour buses full of Chinese and Korean tourists flock through temples and pagodas where monks and residents still pray today?

For the time being, I have to say, I am still fortunate that I was able to experience Myanmar without the tourist crowds. You know you are in a special space when a girl at a local market runs after you to hand you a little bag of chilies with a smile, saying, “Thank you for visiting my market” instead of trying to sell something. Myanmar today feels a little bit like your secret little neighbourhood pizza place that only a few people seem to have discovered, with great food at an amazing prize. You want to tell everybody to go but also hope that the food quality won’t go down as the prices go up. Myanmar is like that, with the amazing temples in Bagan, the floating markets at Inle Lake, monks walking in the streets of Mandalay and the Shwedagon Pagoda at sunrise. But most important, the many friends I made opened up their hearts to show me their country with all their pride. I know I will be back, and while there are lots of good developments on the horizon, I hope that many generations of people will be able to appreciate the Myanmar I have been able to experience. 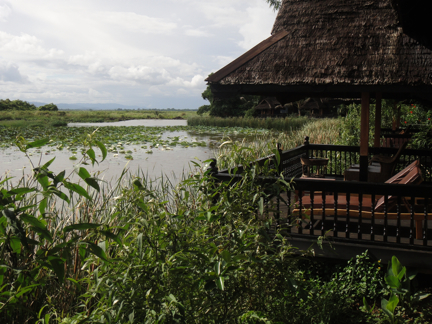