Kimpton stays true to its brand in social media

Kimpton stays true to its brand in social media

It’s the hotel brand that introduced in-room animal-print robes 10 years ago, after all, so one could be forgiven for hoping for creativity and even risk-taking on social media platforms from Kimpton Hotels. Happily, Kimpton has not disappointed. Instead, the flourishing boutique hotel company has stayed true to the spirit of its brand, combining style and substance (customer service) in social media.

Let’s take another look at those animal-print robes. Kimpton recently completed a “Rock the Robe” campaign across both Facebook — where the brand has amassed more than 42,000 likes — and Twitter, where they have more than 16,000 followers. 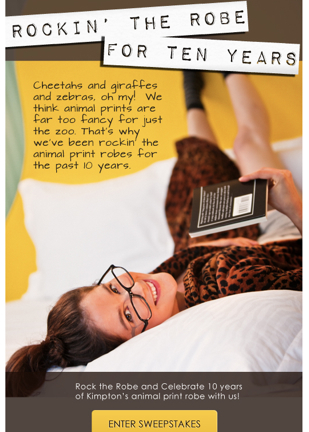 On Twitter, illustrating that social media promotions can be simple and effective, Kimpton reimagined the traditional radio-style promotion (“Be our sixth caller to win!”), encouraging followers to Tweet “I want my warm and fuzzy!” at specified times. The first 10 followers to Tweet when prompted earned a free animal-print robe. The campaign was complemented on Facebook with a “Rock the Robe” sweepstakes that gave away prizes and celebrated the 10th anniversary of the brand’s famous giraffe-, leopard- and zebra-print robes.

A wildly popular ongoing promotion for Kimpton across both Facebook and Twitter is the “Password” campaign. The brand periodically posts or Tweets a “secret password” that guests can use at check-in at any Kimpton hotel to earn everything from room upgrades to a special amenity or dining treat. The password is often valid for a month or more. As a special bonus for “Social Hotel” readers (Don’t say I’ve never given you anything!), I’ll let slip that the current Kimpton password is “Cheers.” So, whisper it at check-in if you’re headed to a Kimpton property during the holiday season.

The password campaign is just another way, according to Kimpton insiders, to “surprise and delight” their guests. Judging from consistent comments on both Facebook and Twitter, the campaign has indeed delighted guests and enhanced brand loyalty.

Finally, during what Kimpton is billing as its “Season of Cheers,” (there’s that word again), now through December, the brand is making its in-house experts especially accessible through live Twitter chats. Kimpton’s Master Sommelier Emily Wines — yes, that’s her real name, you can’t make this stuff up — hosts a live Twitter chat every Wednesday at noon via the hashtag  #winewednesdays. Similarly, Kimpton’s VP of Design Ave Bradley offers Friday chats with holiday decorating tips, while the brand’s master mixologist offers cocktail tips on Mondays. I may write in to suggest these last two switch days, though!

It’s not all stylish promotions for Kimpton, however. The brand values authenticity in social media and uses only in-house staffers as both the “voice” of the brand and to monitor guest comments and Tweets. Kimpton has dedicated the resources to ensure that guest queries — whether complaints, questions or compliments — are quickly and appropriately addressed.

I hope you’ve gained some inspiration from these engaging campaigns. If you have recommendations for other hotel or hotel brand campaigns you think I should highlight in future posts please let me know. In the meantime, cheers!