Just get it right!

How would you handle this situation?

My family and I had dinner at a restaurant where the experiences have always been positive in the past. We arrived on a Friday evening without reservations and were quickly seated. Our server approached our table in a somewhat negative manner and quickly showed he had no interest in providing exceptional service for us this particular night.

My wife ordered the blackberry lemonade martini. The drink came, and she thought it tasted strange. They brought another one, and it still wasn’t correct. She said it was one of her favorite drinks, and she likes it because she couldn’t find the blackberry vodka in stores anymore. They explained that it contained raspberry vodka instead. The restaurant should have changed the name to reflect the new vodka.

The fish was cooked improperly. The bread was stale. The salads were delivered incorrectly three times. The server still did not seem to care. 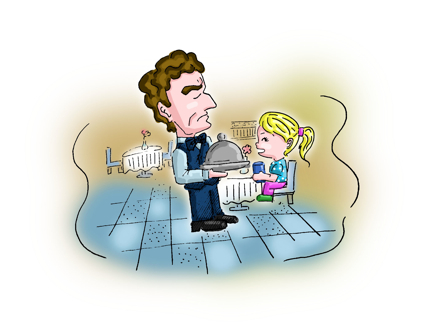 Illustration compliments of an extraordinary artist, Mr. Sean Wang of Shanghai, who created this drawing especially for this post. Thank you, Sean!

The restaurant has the policy of having a manager come by when food is delivered improperly or when there is a complaint. The manager did the proper thing by apologizing and stating that he would take the entrees off the check. The server was obviously annoyed with our “demands” and refused to come by the table with the exception of the check delivery. On the bill appeared charges for my son’s juice, which was refilled twice for a total of US$6.50.