With roughly US$2 million dollars and 17,000 sq ft (sq m) of indoor space in Las Vegas, Rick Platt’s 2004 vision of launching a “new team sport” literally flopped. What goes up must come down was the case for Platt, at least at the beginning of his “initial” vision.

Soon after Platt’s idea of athletes soaring through a hoop and over a court made from trampolines didn’t take off, local skateboarders started banging on his door to use the empty arena. Armed with a never-say-never attitude, a cash box and a US$8 request for admission, fast-forward six months and 10,000 jumpers later, and you’ve got this week’s trend!

Trampoline venues (parks featuring wall-to-wall, grid-like trampolines) are being used by all ages and for many purposes in what seems like an overnight sensation. Several imitations of Platt’s concept are popping up — whether it’s a new build-out, franchise or conversion from an unoccupied or under-utilized space. 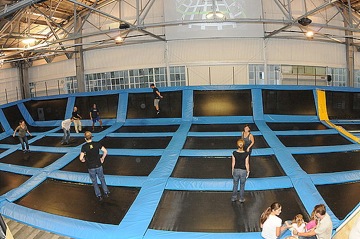 Platt’s son Jeff is CEO of Sky Zone, which has 50 full-time and 500 part-time employees. He says the company had US$15.7 million in revenue from four corporate and 15 franchise locations in 2011, and 34 are expected to be added to the portfolio in 2012.

Chicago-based Sky High Sports was opened by a dad who was looking for a business to start so his kids wouldn’t be embarrassed to come to work with him and was surprised by its success. Colorado’s Jumpstreet was a retiree project. And Xtreme Trampolines was the brainchild of a former Burger King franchisee.

For hotels with an abundance of space and desire to leap into the future with an idea drumming up some major appeal, you may also be lured by the diverse activities these venues are generating. First, the benefits of regular bouncing are supported by scientific research, which states trampolining is a 68% more efficient form of exercise than running. Low-impact jumping also has psychological and rehabilitation benefits, so it’s not a surprise that “Skyrobics” classes have arrived, and adults are breaking a sweat to the tune of 1,000 calories an hour. 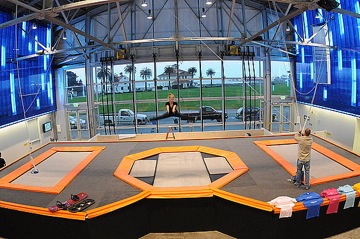 In Grimes, Iowa, a Sky Zone location is attracting a different clientele with aerial variations of dodgeball and basketball. In Indianapolis, three high schools scheduled their post-prom parties at a trampoline venue, while in the South Bay, California, birthday parties are the main marketing draw.

Regardless of the medical and legal risks that obviously go along with the trampoline trend, as well as the question of whether or not this is a flash-in-the-pan success, Rick Platt deserves to be commended for taking a leap of faith. His personal strategy is such that regardless of your business, flag or brand, your competitor can adopt what you’ve created and even do similar marketing, but they can’t clone your staff, so train and maintain consistency throughout your entire system, not just your flagship.

Although a trampoline venue may not be a model fit for you, there is wisdom to be taken from a man who was running a profitable scrap-metal business one day and the next was tracking down insurance companies (over 30 to be exact), believed in chasing his vision and refusing to allow it to outweigh the challenges and risks. It’s a great reminder for us all to always reach for those stars!