Invest in inspired design, not charade

Invest in inspired design, not charade

In a previous blog I discussed the essential need to select the designer with the right style and standards being sought as well as an excellent track record of success with your target markets, then granting them a wide berth in terms of a design brief all while actively encouraging them to come up with something truly unique and long-lasting.

No sooner did I say that then I received an email from one of the industry’s preeminent hotel management companies asking us to design the F&B facilities for what promises to be one of China’s top hotels, currently under construction, with one of America’s equally preeminent architectural firms in charge of designing a truly iconic tower. How exciting, I thought — the chance to be able to design something truly special in China that could really stand out from all the clutter and “photocopied” 5-star hotels.

The management company had told me that the owners had agreed to engage some of the industry’s top design talent for rooms, F&B, spa, et cetera to match that really iconic building being constructed. Even more exciting, I thought.

Then the brief arrived from the property developers that own the asset. It turns out that we would have been simple window dressing, allowing the owners to boast about their international lineup of top designers while paying minimal amounts of their normal fees, as the vast majority of the “design” would be undertaken by a local (read: cheap) designer with the fascinating title of “executive interior designer.” Perhaps I’m being too cynical — maybe they thought they’d still achieve 90% of the original design concepts while saving hundreds of thousands of dollars in fees, an understandable and admirable goal.

Take a look at the percentages in the table that I extracted, word for word, from the request for proposal) I was sent: 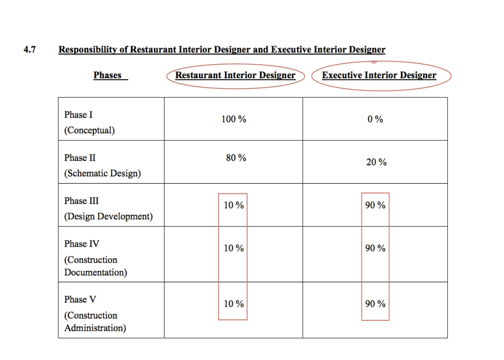 For any property developers out there that may be thinking of such a maneuver, it’s important that you’re educated about the probable outcome: You get what you pay for! Simple as that, unfortunately.

While it may be possible to achieve a reasonably exciting outcome doing this with top architects — where they come up with a unique building concept and provide basic details about materials, structure, floor plates and finishes to a local architect-of-record — it is almost impossible to achieve this with creative, “inspired” interiors, where your customers, or the hotel operator’s customers, come face-to-face and very up-close-and-personal with the outcome (or lack of it).

The old adage that most creative things in life are a result of one-quarter inspiration and three-quarters perspiration is very true, but if you continue to break this down past the cliché you’ll see the point I’m trying to make.

I am not exaggerating when I say that this process often continues right up to several weeks before the project is finished and handed over to the operator. The more exciting and different the designer you may have in mind, the more important that they see it through to the opening. Subtle changes in finishes, lighting and FF&E will change the end result dramatically, and the local, cheap documentation design company will not have the talent or expertise to be able to judge the impact such cheaper, faster and easier changes will make — otherwise they’d be designing to such standards themselves and charging the same level of fees with the same level of worldwide acclaim.

We turned the project down, needless to say. This is the other major issue with this type of development. I do not know of a single top-tier interior design firm that would accept such a design brief, as they know that everybody loses in such a scenario. They end up with a mediocre project attributed to them (at worst a total embarrassment) that could affect future projects and fees. The hotel operator loses, as they end up with an equally mediocre product that is generally undistinguishable from their ever-increasing amount of competitors. And the hotel owners lose, as their mediocre asset is unable to financially perform to its hoped-for levels, reducing the potential for ongoing profitability, resale value and possible exit strategies.

As I’ve said before, homogenization is great for milk, pretty nasty for quality cheese production and a real killer if you want to design an asset that stands out and outperforms the market!