I told you so: How the flash sale bubble popped I told you so: How the flash sale bubble popped

Back in March 2011, I argued social buying and flash sales sites such as Groupon Getaways with Expedia, Living Social, SniqueAway.com and BloomSpot were a recessionary phenomenon and not a new, emerging distribution channel that was here to stay. There is no doubt that as the economy improves, some of these flash sales sites will go away, and the remaining players will have severely diminished roles in hospitality.

Since 2001 we have witnessed a similar “countercyclical” increase and decrease in OTA market share: the better the economy, the smaller the OTA market share. As an example, the OTAs’ share of CRS reservations for the top 46 hotel brands increased from 11.8% in 2008 to a height of 17.1% in 2010 and shrank to less than 16.5% in 2011, according to eTRAK, HeBS Digital Research. All trends point out that the OTA share will decrease to well below 15% in 2012.

I also cautioned hoteliers of the existence of “The Law of Unintended Channel Share Loss,” which stipulates the following: Any booking via the most discounted channel is one less booking for the same hotel via the hotel website, call center and GDS (in that order).

Since travel consumers and customers in general (the demand side) are always open to discounts and deals of any sort, an increasingly important part of any social buying/flash sales site is its ability to convince the supply side — hoteliers — to run deals and accept the large discounts that are integral to the offers.

Similar to 2011, in 2012, all signs are indicating that the hospitality industry continues to be in recovery mode. As travel demand improves, hoteliers have already become reluctant to participate in social buying/flash sales sites because of their “open discount” business model, and provide the supply side of the equation with fresh, intriguing deals. As a result, both sides of the equation suffer and shrink. Online travel consumers, disappointed by the lack of fresh and intriguing hotel deals, have started reverting back to the traditional booking channels: hotel direct, OTAs, GDS and voice.

Here are only some of the indisputable signs of this weakening and shrinkage in the supply side we witnessed in 2011, which have already weakened the demand side as well:

The most recent developments in early 2012 further support my predictions for “shrinkage” of the social buying space. Groupon shares fell more than 7% on January 3 —below the company’s initial public offering price of US$20 — on “concern the company may not have as many daily deals to offer as some merchants pull back” (as reported by Alistair Barr of Reuters).

Susquehanna Financial Group and Yipit  (a daily deal industry tracking firm) surveyed almost 400 merchants recently about their experiences running daily deals with Groupon, LivingSocial and other providers. According to the survey, “52% of the surveyed merchants are currently not planning to feature deals in the next six months. Nearly 24% of the merchants intend to feature only one deal in the next six months, the poll also found.”

I told you so!

Why should hoteliers be wary of using the social buying/flash sales sites? Here are only a few of the reasons that the economics do not work for the hospitality industry:

Here is a case study clearly showing the true cost of distribution via the flash sales sites: 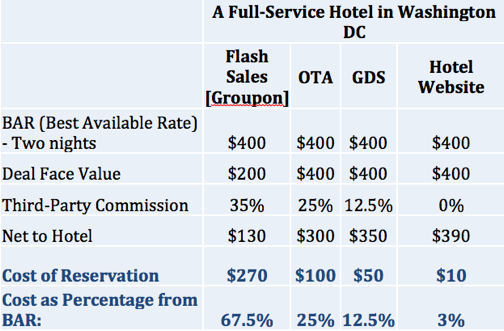 As we see from the example, the cost of distribution via the social buying/flash sales site is 27 times higher than the cost of a booking via the hotel own website.

Some hoteliers participate in social buying and flash sales sites merely because their competition is doing so. My advice? Don’t succumb to the devil. A smart hotelier would never repeat the mistakes or dumb moves of a dumb competitor, so why do it now with the flash sales sites? Stick to the fundamentals in hotel distribution and make sure you are covering all your bases in the direct online channel, including website redesigns, SEO, SEM, email marketing, social media, mobile web, online media, the voice channel, and GDS travel agent channel.

The answer is a categorical NO! As mentioned above, the economic model of social buying/flash sales sites does not work for the hospitality industry. The flawed open business model destroys rate parity and establishes a lower market price. The deals cannibalize hotels’ existing customer base while putting off potential new customers with artificially ballooned deal face values.

What should hoteliers do in 2012 as far as the online channel is concerned?

The main focus and priority for any hotelier should be to sell as much inventory via the most cost-effective distribution channels that can potentially generate the most bookings while preserving rate parity and price erosion. This is the direct online channel — the hotel’s own website.

Driving bookings through the direct online channel — the hotel website — needs to be every hotelier’s priority in 2012. In addition to being the most cost-effective distribution channel, the direct online channel provides long-term benefits and competitive advantages, it prevents rate and brand erosion, helps the hotel to “own” the customer, enables cross-channel and multi-channel marketing initiatives, and builds brand loyalty, among other benefits.

Every line item in the digital marketing budget should be focused on driving traffic to and generating bookings via the hotel website — including SEO, SEM, email marketing, inbound linking, mobile marketing and social media. A multichannel marketing strategy, when properly unleashed, allows hoteliers to dominate with their own marketing message and customer interactions.

Here are some action steps to reduce your dependence on social buying/flash sales sites and OTAs in general. Start by changing the property mindset: Flash sales discounts and OTA commissions should be considered marketing dollars. Do a distribution cost analysis. Maintain strict rate parity and best rate guarantee. Focus on and budget accordingly for the direct online channel. Redesign your hotel website as per Google’s Panda and Freshness updates — you will definitely gain a competitive advantage over the flash sales sites, the OTAs and your comp set alike! Learn how to market your hotel better and smarter than the flash sales sites and the OTAs do. Embrace the mobile distribution channel and utilize social media to engage your customers. Focus on the customer experience!