Hurricane Irene has faded to memory throughout most of the East Coast, but weeks after the floodwaters have receded, there are lessons to be learned — even for hotel social media programs.

The main lesson, as always in the hospitality business, is that customer service is at the core of every program. You may think your hotel’s Facebook page or Twitter account will be focused on brand awareness, or that these platforms can serve as sales channels — and you would be right — but at the end of the day you should always be ready to offer good “old-fashioned” customer service.

On Cape Cod, as Hurricane Irene approached, the storied Sea Crest Beach Hotel had recently completed a US$15 million renovation underwritten by a new owner, Scout Capital. Among other improvements, Sea Crest had just launched a Facebook page (Okay, they were old school — but no more!) that had quickly climbed to nearly 2,000 fans. The day before Irene arrived, authorities invoked emergency measures, and businesses throughout Cape Cod closed. The hotel was safely evacuated. When the storm hit, the hotel itself was spared major damage, but power and phone lines were down for more than 24 hours. 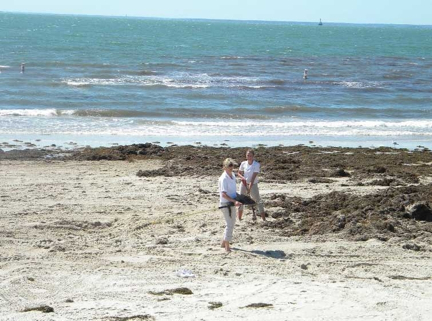 Staff at Sea Crest Beach Hotel on Cape Cod clear seaweed from the beach in the aftermath of Hurricane Irene.

In the hurricane’s wake, sunny skies returned throughout the surrounding region. That meant incoming guests scheduled to arrive for what was still the peak of the summer season were frantic to learn the hotel’s fate and decide on their own travel plans. Had roads reopened? Was there damage to the hotel? What was the cancellation policy if guests were unable to travel based on damage in their own area?

With land-line phones and power out, the hotel was initially unable to post updates to its website, nor could it answer calls coming in to its reservations line. So — customer queries quickly mounted on the Facebook page. Thankfully, though the hotel had left early Facebook posts to its PR agency, it had made sure that several of its own staffers were “admins” of the page, had been trained to use it and had log-in information for the Twitter account, as well. They were able to quickly respond with up-to-the-moment information and post to Facebook and Twitter from their cell phones.

The events were a reminder that social platforms are now a crucial customer service tool, and specifically, that on-site staff should be empowered and encouraged to make use of these platforms.