Yes, it?s true, I have already written a post titled, ?It is all about details.? The reality, though, is that so much evidence exists to support the importance of paying attention to details that this theme could become a never-ending story!

Earlier this year my wife and I visited New York City and stayed at an iconic design hotel located just across from the Metropolitan Opera. Its interiors were a stylish, modern interpretation of art deco ? a bit too dark for my personal tastes, but then, it seems that pretty much any project that has opened in New York in these last few years of the recession has had to have black interiors, although I am optimistic this tendency will change.

I even felt a bit proud to be staying at this landmark when I saw a busload of design students arrive on its doorstep for a ?sightseeing tour? of the property. Indeed, everything in the hotel was beautiful, and I loved the seafood restaurant on the first floor!

The lobby bar was hip, and the rooftop lounge was even hipper. The corridors had wallpaper that made guests feel as if they were walking through a forest of birch trees.

Okay, the bedroom was a bit small, but this was New York, and we were lucky enough to have a view of one of the world?s cultural highlights just across the street. And the guestroom and bathroom were quite tastefully decorated and had touches of design and luxury.

So, all in all, we liked the hotel then and still do now ? but when I used the men?s room, this was the view I had before me: 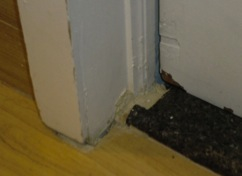 A threshold that was a couple inches too short, a damaged door and a ragged door frame with hundreds of layers of paint on it.

The result is that this photo I took at the hotel is the image I now carry in my head of the property.

When everything else was of such a high standard, one would have thought the hotel deserved something better!