I spent my Halloween lunchtime at opening day of the Radisson Blu Aqua Hotel Chicago with Thorsten Kirschke, COO of Carlson Hotels and president of Carlson Hotels, Americas, and a few members of his team.

My treat was having a first-hand look at the most important opening in Carlson history, perhaps, as it tries to revitalize the flagship brand in North America. For a sneak peak, click here for an exclusive photo gallery.

The hotel is impressive and at a great location for making a much-needed statement. It has high design, great amenities across the site and an opportunity to get off to a good start as 2012 bodes well for group business in Chicago. 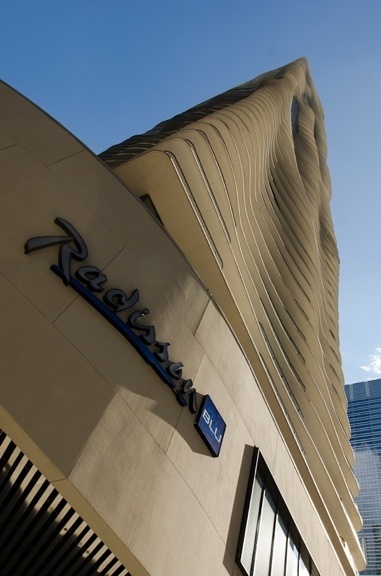 Carlson is doing what it must — putting its own private equity into the game. It owns 50% of the US$125 million Chicago development, and another Blu is under development at the Mall of America outside Minneapolis. Carlson is planning three conversions (Philadelphia, downtown Minneapolis and St. Maarten) and is working hard to get into New York City (a site is in hand, but air rights are now an issue) as well as other key gateways such as Los Angeles and Dallas.

This opening marks the start of a journey for Carlson as it tries to globally synchronize its Radisson brand positioning on two levels — its upper upscale Blu brand that is widely lauded across EMEA, and next its “green” Radisson brand that sits a notch below. Expect to hear more about the Radisson “green” repositioning soon.

The trick is now for Carlson to whet the appetite of developers who need to see the future of this brand being much brighter than it has been for some time.

Now it will be interesting to see how the development community will react to a fresh brand from one of the longest standing players in the business.