Back to my youth

Back to my youth

My parents live in southern Germany, in Neustadt an der Weinstraße. It is a somewhat rural area, where many people cultivate their own little vineyards in addition to holding regular jobs. In the autumn, nearly everyone helps harvest the grapes, and then the local cooperative turns them into wine — mainly fresh, white Riesling or red Spätburgunder. And so did I … when I was still living with my parents.

The “big city” for us — maybe 20 miles (30 kilometers) away — was, and still is, Ludwigshafen. (Now I live in Hamburg, and having seen some other cities in the world, know Ludwigshafen is not a big city at all!)

At that time, Ludwigshafen seemed to me to be an exciting metropolis — it was loud, crowded and full of boutique shops, department stores and shopping malls. The more sophisticated people of the area went to Ludwigshafen when they wanted to buy something fashionable … my parents did not.

And in Ludwigshafen, just next to the grand railway station, was a high-rise building with the ultimate fine hotel (to me): the “Excelsior.” It sounds rather “exclusive,” doesn’t it?

As a boy, it seemed to me that staying in this hotel would be a James Bond sort of scenario.

So believe it or not, I finally had the opportunity to stay there a few days ago when I visited an old friend who now lives in Ludwigshafen. It was quite funny to be able to do this at last; obviously I had changed over the years — the decades — but the hotel certainly had not!

My first discoveries were that the building seemed rather old and dilapidated, the railway station was not so big after all and, actually, the hotel was not a skyscraper.

And inside, it was obvious that if Sean Connery were to stay here now, he would be living in a home for elderly people.

Just have a look at the lovely pictures (sorry, I didn’t have a proper camera, just my phone). It was a museum of my youth! 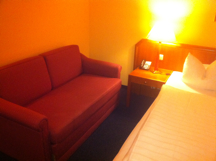 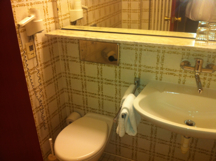 Old-fashioned kinds of signage were still there, the types I remember from days gone by: notices stating guests are not permitted to do this or that were plastered on the door of my room, and in the dining room, there was even a sign saying it was forbidden to take food from the buffet out of the hotel! 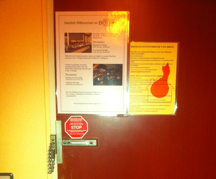 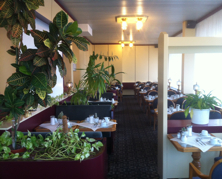 Ahh, and then there were the colors of the built-in wardrobe, the cactus on the dining table, the lamps, the curtains … 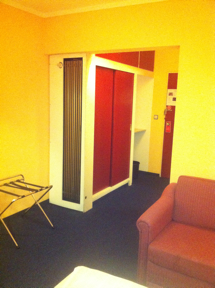 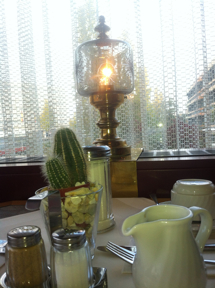 In principle, it was a designer’s hell — but for me, it was a lovely memory of when I was a child. If truth be told, I even felt a bit afraid that one day Starwood, Hilton or IHG might come in and make a “real” hotel out of my charming childhood museum!