Hungry for a hot meal? Craving something sweet? Need a pair of socks or shoes, a bikini or shorts, and prefer making the selection minus a pushy salesperson? Could you imagine renting a bike or selling gold from your lobby via automation, or what about sending an irritated guest to a machine that soothes those suffering from an anger management spell?

A good year ago, I spotted oversized vending machines for moderately priced “tech gadgets” (including iPhones) and couldn’t help but think the sponsor, Best Buy, had lost its marketing mind. What were the chances someone in an airport, of all places, would make an extravagant purchase without sales assistance? However, after my first sighting, I have witnessed several shoppers swiping credit cards thru these modern pieces of automation and can formally declare our fascination with the new automated machines this week’s trend.

Consumer purchasing patterns obviously have changed. Whether it be at retail or an environment where just a short while ago service was an expectation, the desire for quick and convenient solo-shopping is gaining ground. This US$100 billion-a-year industry is transforming thanks to an array of unexpected products dropping out of the units. Let’s take a look at some of the most unique, revolutionary ideas coming out of these machines, including those spotted poolside at The Standard Hotels.

A few years ago, London-based Let’s Pizza launched the world’s first pizza machine with the help of Inventor Claudio Torghele and his Anglo-Dutch group, Unilever. After an overwhelming success in Europe, the beloved pizza robots are now heading to the United States. Buyers can watch the entire process for four pizza types (all made fresh with natural ingredients) in less than 2.5 minutes. 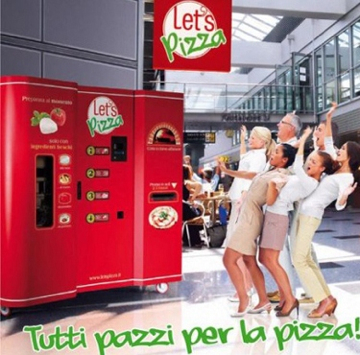 Just a few taps of an LCD screen away, and from a country that consumes half its potato supply in the form of fries (Australia), comes the Food Cube. For two dollars and in less than two minutes, your fries will drop, salted and sauced to your liking!

A collection of unexpected products are dropping out of these modern ATMs — some faster than they can be stocked: socks (great for travelers who forget theirs); bikes (who needs a rental counter or staff); flat, comfy, after-party shoes referred to as Rollasole Ballet Flats (ideal for hotels who cater to the nightclub crowd); board games (think Monopoly or Scrabble for family destinations); shorts and bikinis (Quicksilver has limited-edition apparel dispensing at The Standard Hotels in Hollywood, Los Angeles, New York and Miami); and, finally, marijuana — yes, 24-hour machines will distribute the drug to people with cards authorizing use.

The most bizarre has to be the passive-aggressive Anger Release vending machine designed by the Berlin duo of artists, Yarisal & Kublitz. The motive is to solve the desire to throw and break valuables. Claimed to be an asset to those working on their anger management, I guess it does save time cleaning up the mess, as all pieces break in one place! 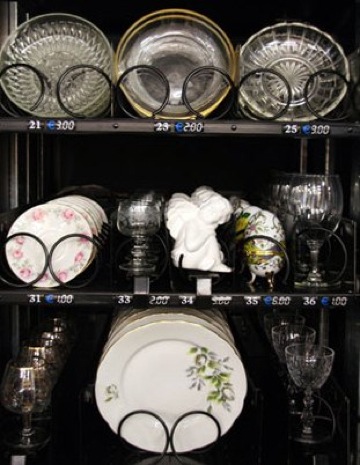 My personal favorite is definitely one that takes care of late-night sugar cravings — often a personal desire while writing the Trend Whisperer! After Sprinkles Cupcake founder Candace Nelson experienced after-hours cravings during one of her pregnancies, she birthed the idea of the “Cupcake Automat.” The pink, ATM-style cupcake machines are currently launching and will be packed with a few hundred designer cakes and restocked constantly throughout the day. At US$3.50 a cake, it’s basically a recipe for dieting disaster, but a fabulous spin-off for Sprinkles. 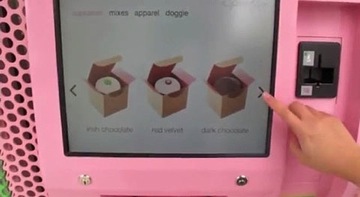