Anyone could be a client

Anyone could be a client

Have you ever been to New York City and seen a Broadway show? When I was in New York last week, I had the pleasure of seeing “Memphis.” Once the show was over, we noticed people waiting by a temporary fence by the Shubert Theatre’s stage door. 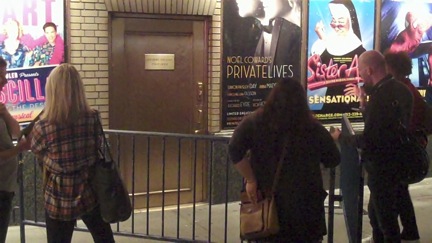 Curiosity got the best of us, and we waited to see the “stars” that had just entertained us for two hours in a bigger-than-=life fashion. There were the regular show groupies who had their programs and sharpies poised and ready for autographs and others that just wanted to say “thank you” to the performers.

As I tend to carry my Flip Video most everywhere, I was able to capture a brief encounter with Hillary Elk, a young cast member that was making her Broadway debut direct from Baldwin-Wallace College. At one moment she was a celebrity signing autographs, and the next moment she blended into the crowd as a typical New Yorker making her way to the subway or home. (Yes, it was me that exclaimed “great show” in a much-too-loud-even-for-outside voice.) We watched as performer after performer quickly met their fans and then disappeared into the city night in regular street clothes.

The next day, I went to Penn Station to catch my train home. A woman blatantly cut in line in front of me. While it raised my blood pressure, I wasn’t in a hurry and said “no problem.” It could’ve been a major meeting planner just as easily as a cast member of “Wicked.”