A slice of healthy heaven

A slice of healthy heaven

In January, I predicted 2012 would be “the Year of the Comeback,” with several repeat performances. With healthy eating being a top goal in restaurants and F&B departments, creating dishes where less is more is a win-win, because what’s not to love about lower food costs, let alone improved customer satisfaction? Combine this with America’s appetite for pizza being at a stupendous rate of some 3 billion pies a year, and you’ve got this week’s trend!

Whether round, square or thick, the ever-evolving pizza is not about the number of toppings but rather giving new life to pizza in a healthier fashion. The new commandments towards a healthier pizza prep process are:

1. Forgo gobs of cheese.
2. Be saucy, but not sweet (no added sugar in the sauce).
3. Think thinner crusts (mini pizzas, cracker-thin crust or pita bread as the pizza canvas).
4. Whole-wheat crust adds extra grams of fiber and fills you up more than white bread.
5. The more veggies, the better (Vidalia onion, zucchini, squash, kale, beet greens). 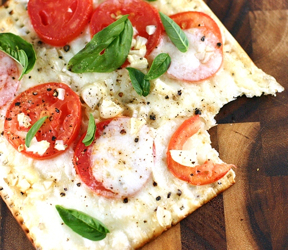 Super-thin crusts are a must for minimalist pizzas. 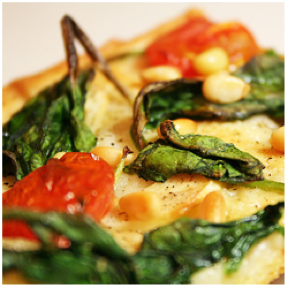 Who says you can’t go cheeseless?!?

Whatever your pizza personality may be, there are four key variables to a pie; crust, sauce, cheese and toppings. And although countless creative variations have been spawned, healthier crust innovations are tops in the newer versions. In California, farmers market pizzas —think spinach, squash blossoms and purple kale — are showing up along with toppings such as truffle oil and Italian white truffles. However, it’s New Orleans-based Naked Pizza that claims it has the world’s healthiest pizza, with 12 whole grains, nuts and roots fortified with high-grade fiber and heat-resistant probiotics. 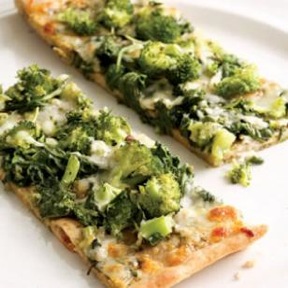 Above and beyond the pizza frenzy seen on celebrity chef menus, Michelin-star chefs have also jumped on board with smaller-sized, over-priced pizzas showing up on fine-dining menus at establishments such as the Fat Duck in England, Nobu in New York and Arzak in Spain.

While some may feel the basic pizza formula has been put through its paces, I’d argue that it’s nowhere near exhausted. In an era when individualized, artisan and good-for-you foods have become de rigueur, pizza is still the safest for experimentation. It’s the ideal time of year to start sourcing at your local farmers market, deviate from the norm with your selection of ingredients and start your oven … or grill (an on-the-rise pizza sub-trend)! 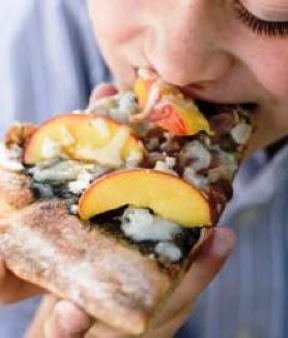