A new waffle’s in town

Who doesn’t love a waffle breakfast? But minus the butter, syrup and whipped cream and instead served as a lunch sandwich? Really?

A few months ago when I first heard the buzz about waffle sandwiches, (spearheaded by Bruxies across from Chapman College in Orange, California), I shrugged it off as another “here today gone tomorrow” 15-minutes-of-fame kind of place. Then other waffle sandwich stands, restaurants and food trucks started popping up, and then, the granddaddy press release from Le Cordon Bleu announcing waffle sandwiches as a food-to-watch in one of its highly respected trend reports. Needless to say, it was time to “let go” and experiment. The testing process — although initially bizarre, since it wasn’t a sweet, completely irresponsible kind of concoction but instead a “bold fold” served on a traditional Belgium waffle — literally had me at the first bite. 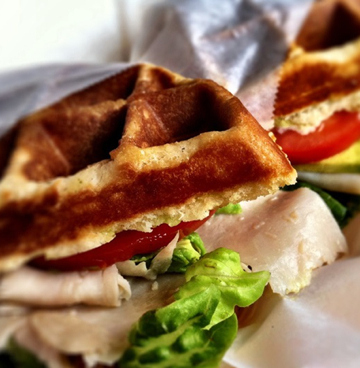 A great addition for F&B departments (especially room service), waffle sandwiches are easy to deliver and complement the comfort food or late-night snack section of your menu really well.

If you happen to be in a region known for a particular food or food combination, it’s also an ideal opportunity to invite your executive chef to let his or her imagination run wild and create an iconic sandwich using local ingredients.

Not only are restaurants starting to embrace the tasty creation (think Love Knot Waffles or Waffle Mania in San Francisco, The Flavour Spot in Portland, Oregon, or Roscoe’s in Long Beach, California), gourmet food trucks are also tapping into this trend. Fillings are ranging from traditional burger ingredients to buttermilk fried chicken to sundried tomatoes and goat cheese with a splash of balsamic. And for dessert, who can pass up a s’mores option! At another trendsetting location, The Iron Press in Costa Mesa, California, I observed all five waffle presses running non-stop with an overwhelmed staff collecting US$8 each for their versions, which, for the record, I couldn’t bear to bring myself to share!

Still hesitating? This example may very well encourage the doubters to forward this week’s trend to F&B management. Sadly, a couple months ago, Disney removed the giant and very popular Mickey waffles from its Epcot menu at Sleepy Hollow, located in the Magic Kingdom. What took its place? Yes, waffle sandwiches, which include sweet and spicy chicken, ham with prosciutto and Swiss cheese along with a Nutella-and-fruit waffle option.

Although I cringe hearing about the disappearance of Mickey’s waffles, as they say, if it’s good enough for Disney, well, maybe you’ll fall under the new sandwich spell during your next visit to SoCal. (Just beware, as I doubt you’ll be turning back!)